There is something Melbournesque about Chateaubriand.  Hidden in the trendy BoBo end of Paris, it is too cool to have the Michelin Guide visit (it doesn’t believe in it).  Its casual style understates the quality of the food.  And, the night we were there, the clientele were predominantly Australian tourists.

The menu is set, €65, for four courses, which ends up with more in between.  This also means that any variations due to dietary requirements are extra work for the busy kitchen, churning out repeated meals instinctively.

We were sat near the front with the booth chair to one side.  The room, though open with the French doors letting in the balmy air, was noisy against the hard floor tiles.  It was full already with the seven thirty sitting well underway.

It began with what they called, cheese puffs, but which I would have called the common Brazilian snack pão de quejo.  They were delicate inside with parmesan blended into the soft dough. 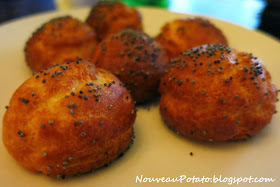 Whilst the others had ceviche, I was served watermelon with avocado.  It was cute, refreshing and herbed whilst the avocado was hard. 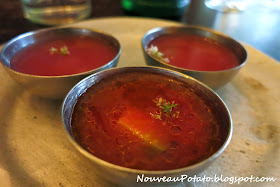 Zucchini flowers were with saffron and tamarind powder.  The filling was hot and lemony with potato and peas. 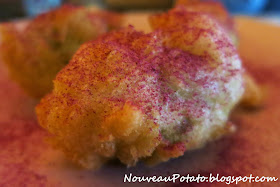 It took some time to order wine from the busy waiters.  We opted for the L’Adret Viogner from Ardeche.  It was bitter and pale with acid and metallic overtones.  Bitter orange.  With the zucchini a hint of vanilla was brought out.

Next was a puree of fresh cold tomato, raw zucchini, vinaigrette and goats’ cheese powdered on top.  It went well with the crusty sour dough rye.  It was refreshing with a hint of basil garlic. 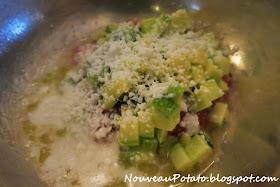 The pea and cucumber soup was an artistic shade of green with drops of nut oil and coffee beans.  The soup was light, consistent in texture, strained and held a chlorophyll taste – an earthiness with the coffee.  It was like a salad in a drink.  The coffee beans had been dried like corn so that they were crunchy. 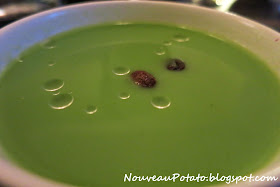 A warm salad followed with olive tapenade, onions, basil turned red, salty stalks and vinaigrette.  It was pleasant, simple but different.  The wine accentuated the herbs. 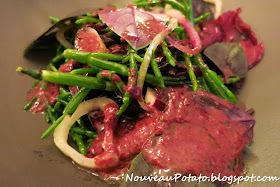 Vegetables were served in nut oil.  The mushrooms were of different varieties and slightly salted.  They also held a barbeque taste.  Warm but crunchy baby corn was sweet and charred.  Eggplant also featured, extra soft against the other vegetables with a smoky taste.  Strands of leek brought the dish together.  The produce was of quality and each was nicely cooked. 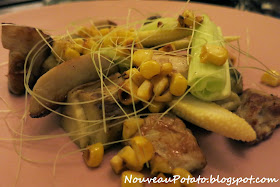 Till this point, my dishes were that of the others, minus the meat.  But now I was served a different dish with beans, pimiento, greens and white currents.  It was seasoned with lemon and pepper and served warm like a warm bean salad.  I enjoyed the flavour combination in this dish. 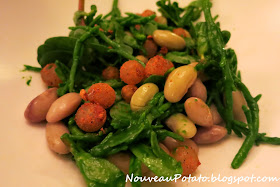 Whilst finishing my final savoury course, I contemplated how Chateaubriand had managed to take things out for vegetarian dishes, rather than putting them in.  Perhaps it is more effort to arrange the sides on a plate without the principal meat, but I felt as if I was somewhat of an annoyance to the kitchen whilst paying the same price as others but for less inclusions in my plates.

Dessert was a fairer chapter with everyone being served buttermilk ice-cream with elderflower vinegar.  It was like foam which had been chilled then creamed like crème fraiche.  It was sour but also sweet like frozen yoghurt.  There was only a hint of elderflower and this first sweet was a refreshing segue. 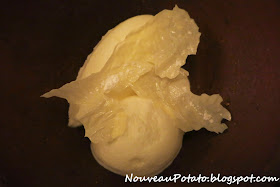 The second dessert arrived before we had finished the first.  It was caramel and meringue with Persian fairy floss at the bottom and a runny egg yolk formed together on the top but room temperature and runny in the middle.  This was the most innovative dish of the evening. 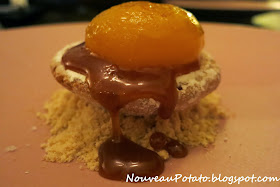 I would not have come here if it had not been personally recommended to me, but we all enjoyed our meal.  Whilst not perfect for vegetarians, it still accommodates and shows off a pleasant, French experience.